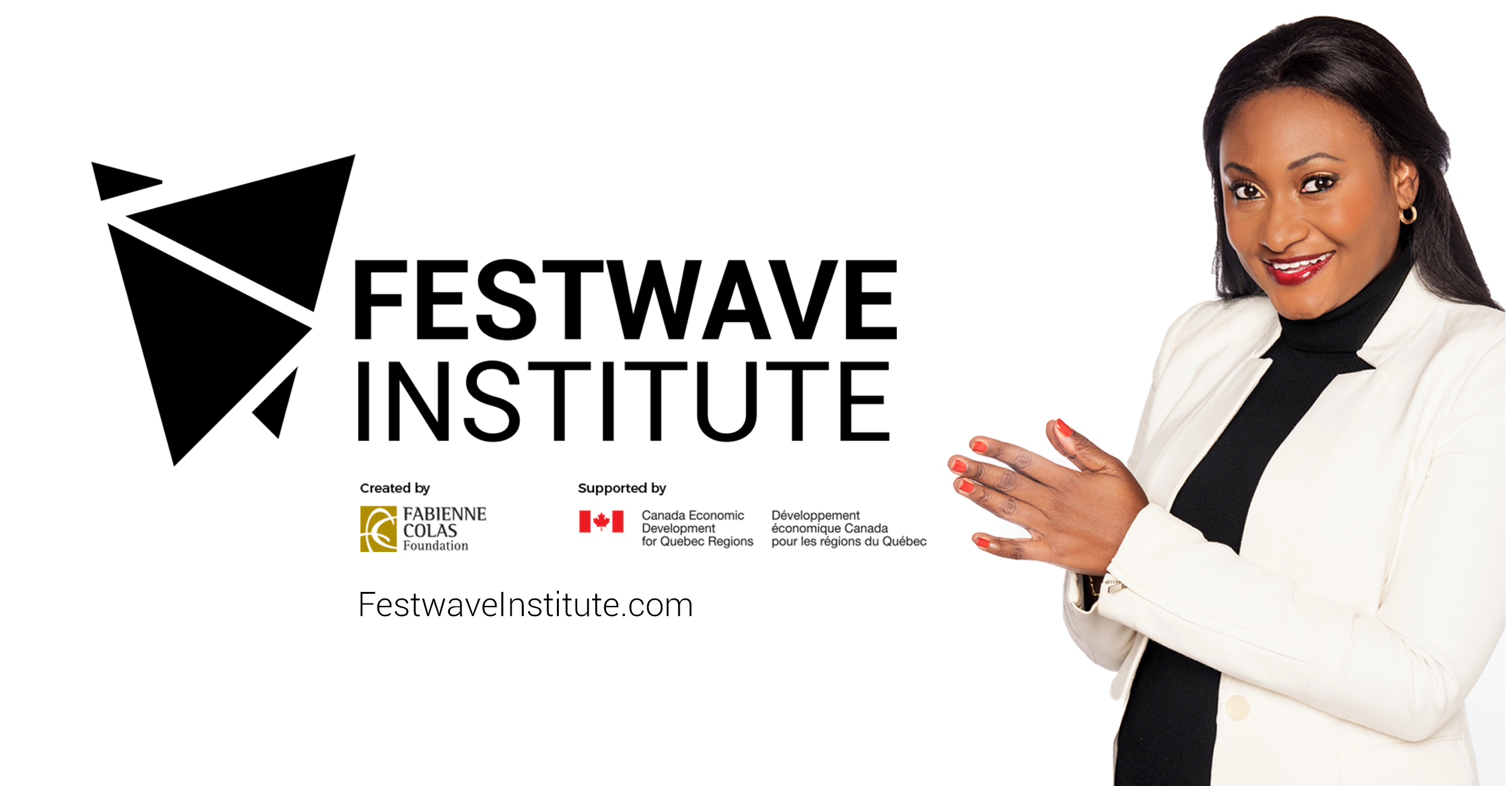 Montreal, February 9, 2022 – Today, the Fabienne Colas Foundation (FCF), with the support of the Government of Canada’s Ecosystem Fund, announced the launch of the Festwave Institute, a national, full-spectrum institute to support underserved Black entrepreneurs in the film and television industry through business training and skill building in order to enable them to seize new opportunities in the film and television industry. .

After 17 years of social, cultural, and economic impact across Canada and around the world, welcoming over 2 million festivalgoers, supporting and featuring over 5,000 artists, giving scholarships and awards of excellence to film professionals from Canada and abroad, the Fabienne Colas Foundation has now created a bigger platform to train the next generation of underrepresented film & TV professionals.

The Fabienne Colas Foundation has established itself as a powerhouse in the Canadian film landscape with its extremely successful Black Film Festival movement in Montreal, Toronto, Halifax, Calgary, Ottawa, and Vancouver. FCF’s award-winning Being Black in Canada incubation program – presented by Netflix in collaboration with the National Bank – has helped emerging Black filmmakers across the country create their first films, tour film festivals and launch their careers in the film and television industry.

The Canadian television and film industry contributes $12.8 billion per year to Canadian GDP and employs over 170,000 people across the country full time. According to Statistics Canada, the majority of the film and television industry’s activity is possible because of entrepreneurship. 52% of Canadian artists and creative industry workers are self-employed, compared to only 12% of all Canadian workers.

Black people are left behind in entrepreneurship initiatives, and the same is true for Black people in the creative industries. Currently, in Canada, only 13% of artists are racialized, compared to 21% of all workers – indicating barriers for Black people to access this career path. This has resulted in Black people being grossly underrepresented in the Canadian film and television industry.

“We all want to see a Canada where everybody works together side by side, where everybody gets a fair chance to be mentored and trained, to be seen, heard, promoted and supported as they deserve to be,” says Fabienne Colas, Founder of the Fabienne Colas Foundation’s Festwave Institute. “The Festwave Institute is a long-held dream that will help bring everybody together to reflect the reality of our diverse Canadian culture on screen and behind the camera. It would not have been possible without the commitment and support of Canada Economic Development for Quebec Regions.”

“Film is a way to represent reality and enable voices to be heard, and the sector is a major contributor to our economy. The Fabienne Colas Foundation quickly understood this need to provide concrete opportunities to Black entrepreneurs, filmmakers, and creators, especially women and members of the LGBTQ2 community. Inclusion and representation are important in our society and take place through the cultural sector, among other things. That is why we are delighted to support the Foundation through the Ecosystem Fund. Thanks to this program, they will be able to share their artistic visions with the entire world,” stated the Honourable
Pascale St-Onge, Minister of Sport and Minister responsible for CED.

“Organizations such at the Fabienne Colas Foundation are pillars in their community, promoting diversity and inclusion across the country. I am delighted the Foundation is part of the Ecosystem Fund under the Black Entrepreneurship Program, and that it will work with other wonderful Canadian organizations to support Black entrepreneurs and aspiring Black business owners,” stated the Honourable Mary Ng, Minister of International Trade, Export Promotion, Small Business and Economic Development. “They will thus be able to recount their history and develop their businesses across Canada and around the world.”

“I would like to congratulate the Fabienne Colas Foundation for its hard work on behalf of our community members and entrepreneurs in Montreal. I am very proud of the screenplay writers and film directors from Black communities who are leaving their mark on Canada’s cultural front,” stated the Honourable Marc Miller, Member of Parliament for Ville-Marie–Le Sud-Ouest–Île-des-Sœurs and Minister of Crown-Indigenous Relations

For more information and to be notified of upcoming programs:

About the Fabienne Colas Foundation:

The Fabienne Colas Foundation (FCF) is a not-for-profit cultural organization dedicated to building bridges and advancing education through the arts, as well as to supporting the creation, production, promotion and dissemination of cinema, the arts and culture in Canada and elsewhere. To fulfill its mission, the Foundation put together 12 festivals and programs to break barriers, celebrate diversity, and foster togetherness, understanding and inclusion. Since FCF’s inception in 2005, its initiatives/festivals have showcased and supported over 5,000 artists and attracted millions of festivalgoers in Canada, the U.S., Haiti, and Brazil. The Foundation mostly promotes Black culture in Montreal, Toronto, Halifax, Ottawa, Calgary, Vancouver, New York City, and Salvador de Bahia (Brazil); and Quebec culture in Port-au-Prince. The Foundation is also the creator of the FCF’s Being Black in Canada program, Canada’s largest incubator dedicated to Black filmmakers.

The Festwave Institute, created by the Fabienne Colas Foundation, is dedicated to removing the barriers that stand in the way of film and television entrepreneurs and supporting them in building successful, sustainable careers. The Institute will do this by giving Black film professionals and other underrepresented creators the tools, skills, and resources required to be successful and independent within a predominantly White-run industry: tailored workshops, panel discussions, masterclasses, hands-on learning, mentorships, networking opportunities, pitching opportunities, equipment access, business skills, match-up programs – all that the Black professional needs to learn, grow, connect and further a career in film and television, both online and on the ground.

Canada Economic Development for Quebec Regions (CED)’s mission is to promote the long-term economic development of Quebec’s regions by giving special attention to those where slow economic growth is prevalent or opportunities for productive employment are inadequate.